This week’s paper totally blew my mind.  It’s so amazing to me that we know so much about how cells work and yet this paper describes a totally new process that has never been observed before.  How’s that possible?  What else remains to be discovered?
In this week’s issue of Cell, Speese et al. describe a new method for molecules to exit the nucleus.  The nucleus is where the genome is stored and where genes are expressed into RNA (see Fundamentals section for more details).  The nucleus is surrounded by two nearly impenetrable membranes, an inner and outer membrane.  All biology students are taught that there is only one way into and out of the nucleus: the nuclear pore complex (NPC).  It’s an elaborate and selective protein pathway that spans the inner and outer membranes of the nucleus (I’ve written about the nuclear pore complex before in the context of long-lived proteins).  If the molecule has the right kind of chaperone, then it can pass through the NPC to get into the cytoplasm.
The lab that did this research studies a signaling pathway at the Drosophila neuromuscular junction (that’s what I study too!)  The neuromuscular junction is a synapse (remember synapses?) between a motor neuron and a muscle.  The pathway that they study is called the Wnt pathway and they’ve shown that it helps regulate the development of the neuromuscular junction.  The neuron releases a signal that binds a receptor on the muscle.  The active receptor, called Frizzled, is taken into the cell where it gets cut into two pieces.  One piece enters the nucleus and they have observed that it accumulates into big aggregates (we’ll call them “foci”).  But what happens next?  They suspected that the foci may leave the nucleus, but how could such a big glob of proteins get through the relatively narrow nuclear pore complex?  Ay, there’s the rub. 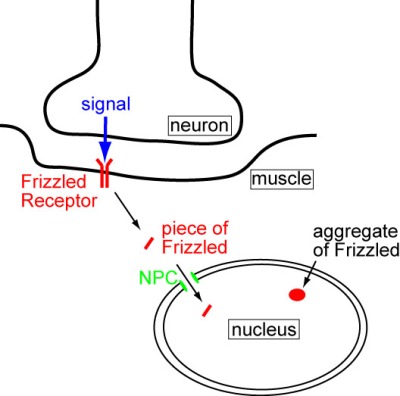 Nuclear Lamins
The first thing the authors investigated was whether nuclear lamins might be associated with the nuclear foci.  Nuclear lamins are the resident proteins in the nucleus that help spatially organize the chromosomes and provide scaffolding for the nucleus and nuclear pore complexes.  Lamins are important medically because there are a number of “laminopathies”, human diseases associated with mutated lamins.  One particular lamin, called LamC, does appear in the Frizzled aggregates in the muscle nucleus.  In fact, if you get rid of LamC, then the Frizzled receptor no longer forms foci in the nucleus.  The association with LamC, though, doesn’t explain how the Frizzled receptors function in the nucleus.
Perhaps Frizzled binds to DNA; that’s the major molecule in the nucleus after all.  Nope.  The authors found that there is no DNA associated with the Frizzled clumps.  Well, perhaps it binds mRNA then.  Remember that DNA is copied into small pieces of mRNA which then travel out of the nucleus and direct protein synthesis (see Fundamental #1).  Sure enough, they find that there are some mRNA molecules bound in the Frizzled/LamC aggregates.  It is not that uncommon to find proteins bound to mRNA in the nucleus and usually they all transport out of the nucleus through the pores.  mRNA can only be translated into protein in the cytoplasm, so they have to leave the nucleus to be functional.  The problem is that these Frizzled globs are way too big to go through the pores.  The aggregates must disassemble before leaving the nucleus, right?  Right?  Not necessarily.
Nuclear budding
The researchers did lots of imaging of the Frizzled foci and found something strange.  They sometimes would see an aggregate surrounded by nuclear membrane on both sides.  In other words, the aggregates appeared to be in the space in between the inner and outer membranes.  What?!  They also imaged the foci over time and could see them staying intact as they leave the nucleus.  In the end, what they believe is happening is that the particles get surrounded by the inner membrane and then pinch off into the intermembrane space.  At that point they are surrounded all the way around by a sphere of membrane.  That membrane fuses with the outer membrane, spitting out the particles into the cytoplasm.  See the figure below for a visual representation of this process.  The role of LamC in this process is probably to help promote rearrangement of the membrane scaffold to allow nuclear budding.

It turns out that this same sort of process happens during infection by a herpes virus.  The viral genome goes into the host nucleus and directs formation of new viruses.  The complete virus is much too big to exit the nucleus through the pores, so it uses this method of nuclear budding to get out of the nucleus.  Everyone assumed that this process was specific for viruses, but now we see that it’s actually a normal cellular activity.  In fact, the virus probably hijacks the apparatus for normal nuclear budding to get itself out of the nucleus.  Viruses always know more than the scientists.
Synaptic translation
Now we’ve solved the problem of how the Frizzled/LamC/mRNA complexes can exit the nucleus, but what happens next?  How does this continue the Wnt signaling pathway?  The authors followed the path of one mRNA that binds Frizzled in the nucleus.  They found that the mRNA localizes near the synapse (in the muscle side).  It’s been shown before that local protein synthesis at the synapse can direct synapse development and plasticity.  When LamC is impaired, this mRNA no longer goes to the synapse, which really goes to show how important lamins are in cellular signaling.
Review time:
1) Signal from neuron to muscle activates the Frizzled receptor
2) A piece of the receptor gets cut off and enters the nucleus (via the NPCs)
3) The Frizzled piece binds up with LamC and particular mRNAs
4) LamC helps rearrange the nuclear membrane, so budding can occur
5) The large Frizzled particles exit by budding straight through the membranes
6) Frizzled and the mRNA travel to the synapse
7) The mRNA is translated into a particular protein that directs synapse development
This helps solve a problem about the laminopathies (diseases caused by mutation of a lamin).  Often these diseases cause muscular dystrophy.  Well, maybe what happens at the Drosophila neuromuscular junction could happen in humans too.  If a lamin is mutated, it may prevent membrane budding, so RNA-protein complexes cannot exit the nucleus.  If they get stuck in the nucleus, the mRNA cannot be translated at the synapse, so no new proteins will be made and the neuron-muscle synapse will be impaired.  That would explain defects in the muscle system caused by these diseases.

View all posts by rwball

This site uses Akismet to reduce spam. Learn how your comment data is processed.